ST. LOUIS, Oct. 18, 2021 /PRNewswire/ -- There's no place like home – but how do you find "home" after relocating? In new customer data and survey findings, Mayflower reveals how Americans are defining their identities in new places amid the great reshuffling across the nation.

Today, Mayflower shared the results of its new "Finding Home" data, indicating the top states and cities Americans moved to throughout the past two years. The data showed that, among locations where Mayflower supported 800 or more total moves, Idaho experienced a higher percentage of inbound moves than any other state from July 2019 to July 2021. In addition, Sarasota, Fla., saw a higher percentage of inbound migration compared to any other major metropolitan area during the same timeframe.

According to the survey:

On the regional front, New York style pizza was cited as the favorite Northeastern regional cuisine (63%), while barbeque (44%) topped the list of Midwestern food favorites. However, compared to other regions, Westerners were most likely to say their area had no well-known foods. When it comes to commonly used local lingo, the survey also found the most debated regional terminology to be "stuffing" versus "dressing," with 38% preferring the former, 36% preferring the latter and 26% unsure.

"As the most recognized and trusted moving company in the country, Mayflower moves thousands of families each year, helping them settle into their new homes and begin to explore their identities in a new place," said Eily Cummings, director of corporate communications, Mayflower. "With a broad network of more than 200 agencies, our recent data also points to the broader moving patterns we're seeing among Americans during this time of great reshuffling."

Where Americans are Finding Home

The top inbound metropolitan statistical areas (with 800 total moves or more) from July 2019-July 2021 were:

To learn more about Mayflower and access regionally curated welcome resources on Finding Home for those who have just moved or are considering one, visit Mayflower.

Survey Background and Methodology
TRUE Global Intelligence, the in-house research practice of FleishmanHillard, fielded an online survey of 1,000 U.S. adults who moved more than 300 miles during the time frame of July 2019 to July 2021. The survey was fielded between September 13-23, 2021. The results are representative of the U.S. population by gender, generation and U.S. Census region.

About Mayflower
Mayflower is America's most recognized and trusted moving company. With headquarters in suburban St. Louis, Mayflower maintains a network of 200 affiliated agencies. For more information about Mayflower Transit and its services, visit Mayflower.com or find us on social at @MayflowerMoving or @MayflowerMovingCompany.

This Company Invitation Offers Jenna’s Curated “Bohemian Hoop” Collection
Share Engagement Story n Get Chance to WIN The KNOT's Prizes
Is the Office Dying? Of Those Who Quit During the Pandemic, One in Four Did So for the Flexibility to Work from Anywhere
Pure Gold and Silver Premium Bullion Holiday Gifts by The Royal Canadian Mint
Puffy Rated Best Mattress For Better Sleep, Know Here Details
EchoX.app launches "The METASENS Universe" project, rocket to the moon 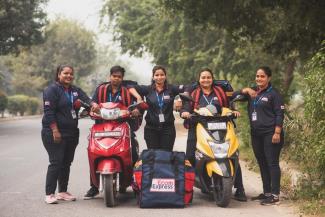