With a special promotion on large tubs of the bingeworthy Cinemark popcorn, and multiple sweepstakes to win free popcorn, including an entire year’s worth, popcorn lovers have much to celebrate on Jan. 19, 2023.

January 17, 2023 PLANO, Texas--(BUSINESS WIRE)--Cinemark Holdings, Inc., one of the world’s largest and most influential movie theater companies, is celebrating the star of moviegoing snacks on Thursday, Jan. 19 for National Popcorn Day. With exclusive promotions and golden sweepstakes that give moviegoers the chance to win free popcorn, including an entire year’s worth, popcorn aficionados have much to celebrate. More information on this most delicious holiday can be found at Cinemark.com/popcornday.

“Cinemark’s signature popcorn is the key to every great moviegoing experience, and we are excited to honor the iconic movie theater concession in multiple ways for National Popcorn Day,” said Phillip Couch, Cinemark EVP Food & Beverage. “Moviegoers have long craved that salty, buttery goodness to enjoy while watching a captivating film in our immersive auditoriums, and on this special day we are making it even easier to relish with delicious deals and sweepstakes worthy of the true superstar of movie snacks.”

One Snack to Rule Them All

Although moviegoers have many delicious options to choose from while visiting the concession stand, they have proudly demonstrated their enthusiasm for the crunchy, salty kernels time and time again. During 2022 alone, over five billion ounces of popcorn was consumed nationwide at Cinemark theaters.

To celebrate popcorn’s biggest day, all large popcorns will be 50% off on Jan. 19 only, both in-theater and through the Snacks in a Tap advance ordering feature. Moviegoers can secure that tub of mouth-watering goodness and share with friends and family as they take in the cinematic experience with Avatar: The Way of Water, A Man Called Otto, or M3gan. They can also save their tub and try their hand at “Popcorn Guy" ’s legendary bucket-spinning skills.

Popcorn enthusiasts can delight in the multiple sweepstakes taking place in honor of the holiday. For the social-media savvy moviegoers, all who follow the official Cinemark Instagram account (@Cinemark) and comment on the National Popcorn Day post on Jan. 19 will have the chance to win a free large popcorn. Fans must simply tag three friends in the comments with whom they would love to share that cinematic snack alongside a great film.

Movie lovers looking to enjoy their favorite snack all year long can enter the Snacks in a Tap National Popcorn Day sweepstakes. From now until Jan. 19, all who place a concessions order using the Snacks in a Tap advance ordering feature will be entered to win free popcorn and Coke® for an entire year. Five lucky winners will be chosen and able to enjoy this iconic snack pairing all throughout 2023 to go alongside the exciting line up of films including The Little Mermaid, Spider-Man: Across the Spider-Verse, Mission: Impossible – Dead Reckoning Part One, and Oppenheimer.

It's (Pop)corn! We Can’t Imagine a More Beautiful Thing

Cinemark’s bingeworthy popcorn is easier than ever to secure with multiple ways to fulfill each customer’s order. For supreme convenience, the Snacks in a Tap advance ordering feature allows customers to purchase their favorite movie theater snacks online and have them waiting for them at a dedicated pick-up counter once they arrive at the theater. For a celebrity experience, customers can have the snacks delivered directly to their seat for a nominal fee.

For cravings that extend all the way past the end credits, Cinemark popcorn is now available on Uber Eats in select markets in Texas, with more to come nationwide. With a few simple clicks, customers can have fresh, buttered popcorn delivered directly to their door, and enjoy the taste of the big screen whenever and wherever they are looking to create a cinematic moment. One of the tasty options available includes Cinemark Pack-A-Pop, which is the equivalent of three large popcorns, perfectly packaged to-go. In addition to being available on the app, the treat can also be purchased in-theater and taken home.

For more information on Cinemark’s concession offerings and to purchase tickets, visit Cinemark.com or the Cinemark app.

Headquartered in Plano, TX, Cinemark (NYSE: CNK) is one of the largest and most influential movie theater companies in the world. Cinemark’s circuit, comprised of various brands that also include Century, Tinseltown and Rave, operates 517 theaters with 5,835 screens in 42 states domestically and 15 countries throughout South and Central America. Cinemark consistently provides an extraordinary guest experience from the initial ticket purchase to the closing credits, including Movie Club, the first U.S. exhibitor-launched subscription program and the first to reach the one-million-member milestone; the highest Luxury Lounger recliner seat penetration among the major players; XD - the No. 1 exhibitor-brand premium large format; and expansive food and beverage options to further enhance the moviegoing experience. For more information go to https://ir.cinemark.com.

Moviegoers have long craved that salty, buttery goodness to enjoy while watching a captivating film in our immersive auditoriums, and on this special day we are making it even easier to relish with delicious deals and sweepstakes worthy of the true superstar of movie snacks 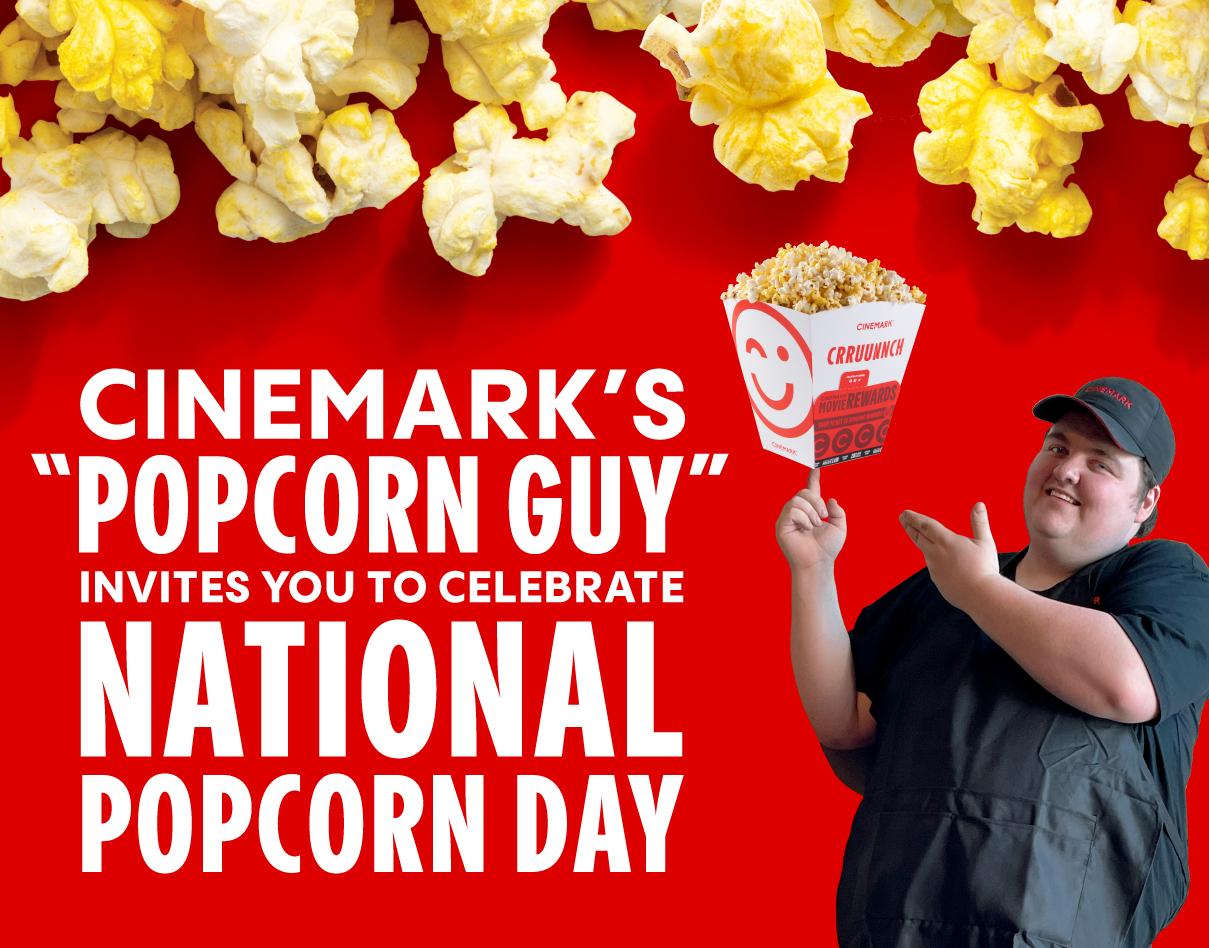