The festival of Shri Krishna Janmashtami was celebrated with great enthusiasm in the Chief Minister's residence.
The Chief Minister prayed for the happiness and prosperity of the people of the state by offering prayers to Lord Krishna.

Raipur, 30 August 2021: The festival of Shri Krishna Janmashtami was celebrated with great fervor at the Chief Minister's residence today. Chief Minister Shri Bhupesh Baghel prayed for the happiness, prosperity and happiness of the people of the state by worshiping Lord Shri Krishna ji with law and order amidst chanting of mantras. 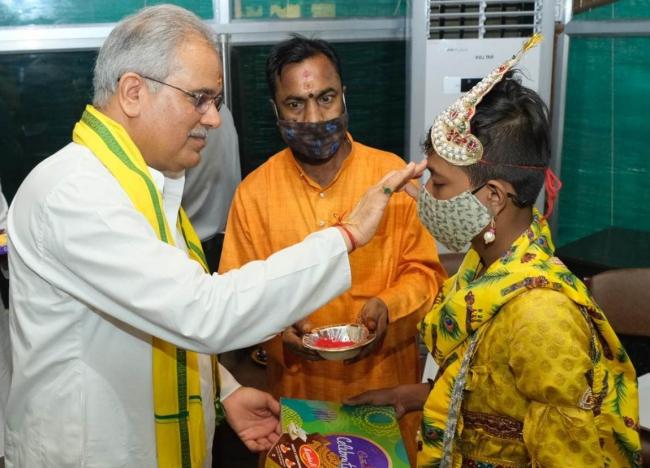 In this program organized by the Department of Culture, the deaf and mute children of Kopalvani Vidyalaya in the capital Raipur participated in the costumes of Shri Krishna and Radha. On this occasion, Vice-Chairman of Chhattisgarh State Vanaushadhi Plant Board Mr. Chivendra Karma, Director of Culture Department Mr. Vivek Acharya and many other officers and employees were also present. The Chief Minister fed sweets to the children by applying tilak. 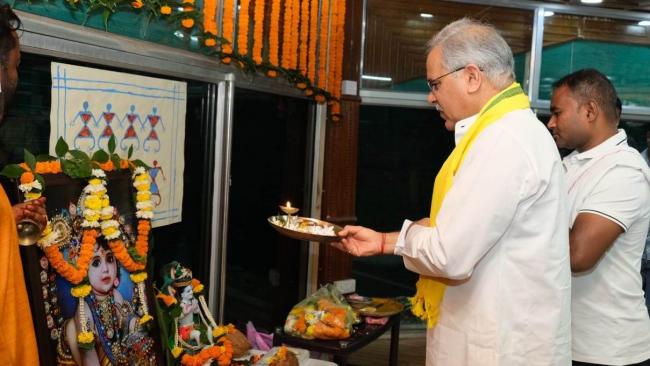 Dr. Preeti Upadhyay, professor of Kopalvani Vidyalaya, said that children from class 1 to graduation level have participated in this program. He said that all the children in the school are also trained in the art of dancing, painting and drawing. Earlier, his paintings made by his own hands have also been presented as a gift to the Chief Minister by the children of the school.

Chief Minister congratulated the people of the state on Janmashtami

Chief Minister Bhupesh Baghel has greeted and greeted the people of the state on Janmashtami. On this occasion, he has wished for happiness, prosperity and happiness of the people of the state. Shri Baghel has said in his congratulatory message that the life pastimes of Lord Shri Krishna and his teachings teach us the right art of living. The lessons given by him are relevant to every situation of life and show the right path.

Declared dry day on Janmashtami festival: Ban on purchase and sale of country-foreign liquor in the state

On the occasion of Krishna Janmashtami, 30 August has been declared as a dry day by the state government. On this day all retail shops, restaurant-bars, hotel-bars, clubs etc. of country-foreign liquor will remain closed in the state.
According to the order issued today from the Commercial Tax (Excise) Department, Mahanadi Nava Raipur, no liquor shop, hotel, restaurant, club etc. will be allowed to sell and serve liquor during the declared dry day. During this period, there will be a strict ban on personal storage of liquor and storage of liquor in unlicensed premises. All the district offices, divisional and state level flying squad teams of the state have been directed to take effective steps to check illegal transportation and sale of liquor.