"Firstly, I was totally impressed by the small form factor of the device, that still managed to pack so much power," says Jussi Ängeslevä, professor at Berlin University of the Arts and the Royal College of Arts in London.

"What kind of totally blew my mind was the fact that I thought of it as a projector but then looking at the interface — the Advanced version has basically a whole operating system — it's kind of like a mini media center. Instead of an Apple TV you could have the Wemax Go Advanced as your sort of own entertainment system anywhere your home might be."

Professor Ängeslevä's favorable remarks regarding the Wemax Go Advanced may serve as a major signal post for technology insiders, who hold his opinion in high esteem. Professor Ängeslevä is actively involved in the rapidly growing field of new media, working with digital materiality, and interaction design and has served on numerous international art and design juries, academic chairs, and boards.

To win the favor of such a decorated and influential design icon is a significant honor for Ampula Inc., creators of the Wemax Go Advanced, which raised over $100,000 within 24 hours of its listing on Indiegogo and crossed the $155,000 threshold soon after, as the total continued to climb higher every hour.

"All in all, I think it really is a sound product," says Professor Ängeslevä.

"I'm very, very impressed by the hardware. I didn't expect it to be this good. "

For 17 years, Professor Ängeslevä has been with ART+COM in Berlin, where he is currently the Vice Creative Director.

According to his biography, Professor Ängeslevä's focus "has always been intentionally in between fields: combining understanding of visual, physical and interaction design with algorithmic, electronic and mechatronic knowledge to create innovative and elegant experiences. His design ethos is leveraging hardware, software, physical and visual design in the search for elegance in spatial communication, where the meaning is inseparable from the medium communicating it."

In his review of the Wemax Go Advanced, Professor Ängeslevä said he was specifically impressed by the following features and aspects of the technology:

The Wemax Go Advanced is available now as part of an exclusive Indiegogo campaign starting at $599.

About Ampula, Inc.: Wemax is the brand of Ampula, lnc., a US-based Smart IOT company founded in 2020. In order to bring Artificial Intelligence into people's daily lives, Ampula partnered with Appotronics to invent the Wemax Go, which is the world's thinnest ALPD laser projector with the combination of ALPD laser power and a compact and slim design. Most of the research and development team previously worked at TP-Link and Google, where they gained a wealth of knowledge and product development experience. 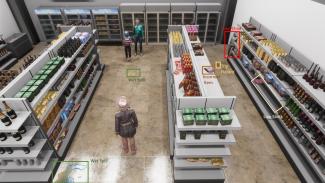