Interview for lecturer under Swami Atmanand School Chura on October 11

Interview on October 11 has been fixed for contractual appointment on the post of lecturer out of the academic posts for Swami Atmanand Excellent English Medium School Chhura, operating in Chura development block of the district. District Education Officer Shri Karman Khatkar informed that the interview will start from 10 am in the meeting room of District Panchayat Gariaband, in which the interview will be conducted for a total of 14 posts.

The applications received from the applicants were called for claim objection in the prescribed format by 25 September 2021 from eligible and ineligible candidates for the advertised posts after testing/scrutinying the minimum qualifications and certificates. The claims and objections received were examined. After the tests, a copy of the list has been pasted on the notice board of the District Education Officer, after validating or invalidating the claims and objections of the concerned candidates, after resolving them. Therefore, the concerned candidates can observe the action taken on their claim objection on the notice board of the Joint District Office, Room No. 88, Office of the District Education Officer, Gariaband. 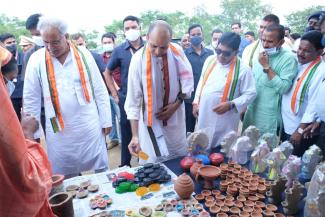