NEW YORK--(BUSINESS WIRE)--At a time when many Americans are talking about our democratic ideals and the forces that both fortify and undermine them, the Winter 2022 edition of Carnegie Reporter magazine looks at how individuals and society can best advance two key values of American democracy: voter participation and voter protections.

The Voting Issue: People. Protections. Participation. was produced by the philanthropic foundation Carnegie Corporation of New York. The Winter 2022 edition of the magazine assesses challenges to democracy, such as political polarization, as well as possible solutions, such as universal civic duty voting, and celebrates some of the people who safeguard the voting system, ensuring its integrity at the federal, state, and local levels. The issue provides context and analysis through a breadth of articles written by Corporation leadership, grantees, academics, frontline practitioners, and others with deep knowledge of the subject, including a sense of what the future will likely hold.

The edition also provides an opportunity to get to know Dame Louise Richardson, the new president of Carnegie Corporation of New York and the first woman to lead the foundation. In an interview with Emmy Award–winning journalist and long-serving Corporation trustee Judy Woodruff, Richardson talks about her life of firsts, including being the first woman to lead both the University of Oxford and the University of St. Andrews; the role of philanthropy in society and in her own academic career; and the dangers of polarization and binary thinking. “The Augustinian precept audi alteram partem — listen to the other side — should be our motto,” commented Richardson.

“With a deep dive into the voter protections and participation that are needed to maintain and guarantee a healthy democracy, the latest issue of the Carnegie Reporter offers insights from experts –– including from our new president, Louise Richardson, a noted specialist on international terrorism and foreign policy –– on the challenges and opportunities for our American democracy,” said Julia Weede, the Corporation’s chief communications officer. “We also hear from former New Jersey governor Thomas H. Kean, chairman of the Corporation’s board of trustees, about the desperate need for politicians to overcome their hostile political divides. And we show you democracy in action through the images of American photojournalist Sue Dorfman, who brings us the extraordinary mosaic of this year’s election season.”

“Philanthropy has a long and distinguished record of standing up for the voting rights of vulnerable populations, including in recent decades, and we are pleased to publish this collection of the latest thinking and most effective work underway in the sector,” said Geri Mannion, managing director of the Corporation’s Strengthening U.S. Democracy program. “There is still more work to be done — as we are learning from the latest wave of efforts to suppress the vote. We believe that no matter what issues philanthropic organizations focus on, we will get better results if all Americans can participate equitably in our democracy and hold our government leaders accountable.”

The Importance of Bipartisanship Thomas H. Kean, chairman of Carnegie Corporation of New York’s board of trustees, draws from his role as chair of the 9/11 Commission to make a case for a return to bipartisan collaboration, noting that we can start by respecting each other: “Only bipartisan efforts will stand the test of time and best serve this country’s needs.”

The Fight to Vote — It’s at the Heart of American History Michael Waldman, president of the Brennan Center for Justice, provides historical context, arguing that the struggle for voting rights is never over. “The fight for the vote over the years has been more than a clash of classes, parties, factions, races, and interests. It has been a long drive, stumbling, retreating, but ultimately in one direction: toward fulfilling that ideal.”

Protecting and Advancing the Right to Vote Due to the pandemic, the 2020 election was also one of the friendliest to voters, resulting in the highest voter turnout in more than a century. Since then, multiple states have passed laws making it harder to vote. The Corporation has funded nonprofits working on voting issues for more than 40 years. Learn how Corporation grantees helped achieve 2020’s record turnout and the range of strategies they are using in response to the changing conditions of voting in America.

How Could Universal Civic Duty Voting Improve American Democracy? Social policy expert and author Heather McGhee writes about how political campaigns in America would change, amid other consequences, if voter participation were required by law. Such a policy would give America a voting system where everyone would count, writes McGhee, and the electorate would look far more like America.

A Dozen Ways to Increase Voting in the United States E. J. Dionne Jr. and Miles Rapoport, coauthors of a book about universal civic duty voting, propose a list of reforms needed to lay the groundwork for successful implementation. They say federal law must promote changes in three areas: expanding opportunities to register, increasing options for voting, and strengthening effective election administration.

What Can Philanthropy Do to Protect and Expand Voting Rights? As a leading voice in the sector, the Corporation’s Geri Mannion writes, “The latest efforts to suppress the votes of Americans demand that philanthropies across issues, from environment and education to health care and economic justice, do more by continually supporting the expansion and protection of voting rights — and not just at election time.”

On the Line: Democracy in Action Center Point features the work of photojournalist Sue Dorfman. For decades, she has traveled the country documenting the power of the vote and the importance of participating in ways large and small to strengthen our democracy. From Arkansas to Ohio, from Maryland to Mississippi, the visual stories she’s captured are as varied as they are inspiring.

Additional highlights:
Andrew Carnegie Fellow and historian Timothy Snyder suggests 20 specific ways to defend democracy with an emphasis on individual actions; Andrew Carnegie Fellow and political scientist Daniel Treisman and economist Sergei Guriev look at what is driving a worldwide surge in the number of dictatorships, which now outnumber democracies; a profile of linguist Nana Aba Appiah Amfo, the first female vice-chancellor of the University of Ghana, charts the course of her distinguished career in academia, including fellowship support from the Corporation; and two New York City high school students talk about their experiences with grantee Transcend, a nonprofit that creates tools to elevate stakeholder voices in educational decision-making.

From the Corporation’s International Peace and Security program, grantees and experts offer brief perspectives on how Russia’s invasion of Ukraine is likely to alter the world order; and senior resident fellow Sharon K. Weiner explains the vital role of the nongovernmental sector in reducing nuclear threats and the need for public awareness of weapons programs and nonproliferation.

For more information, visit the online issue of the Carnegie Reporter. Subscribe to receive the print version of the magazine and the foundation’s newsletters — these resources for knowledge to inspire informed action are always free.

The Reporter has been the flagship “magazine of ideas” for Carnegie Corporation of New York for more than 20 years, assessing emerging trends and urgent challenges and offering ideas to inspire informed action because #WeHaveIdeas. Readers are encouraged to republish or excerpt articles by seeking permission from the foundation. 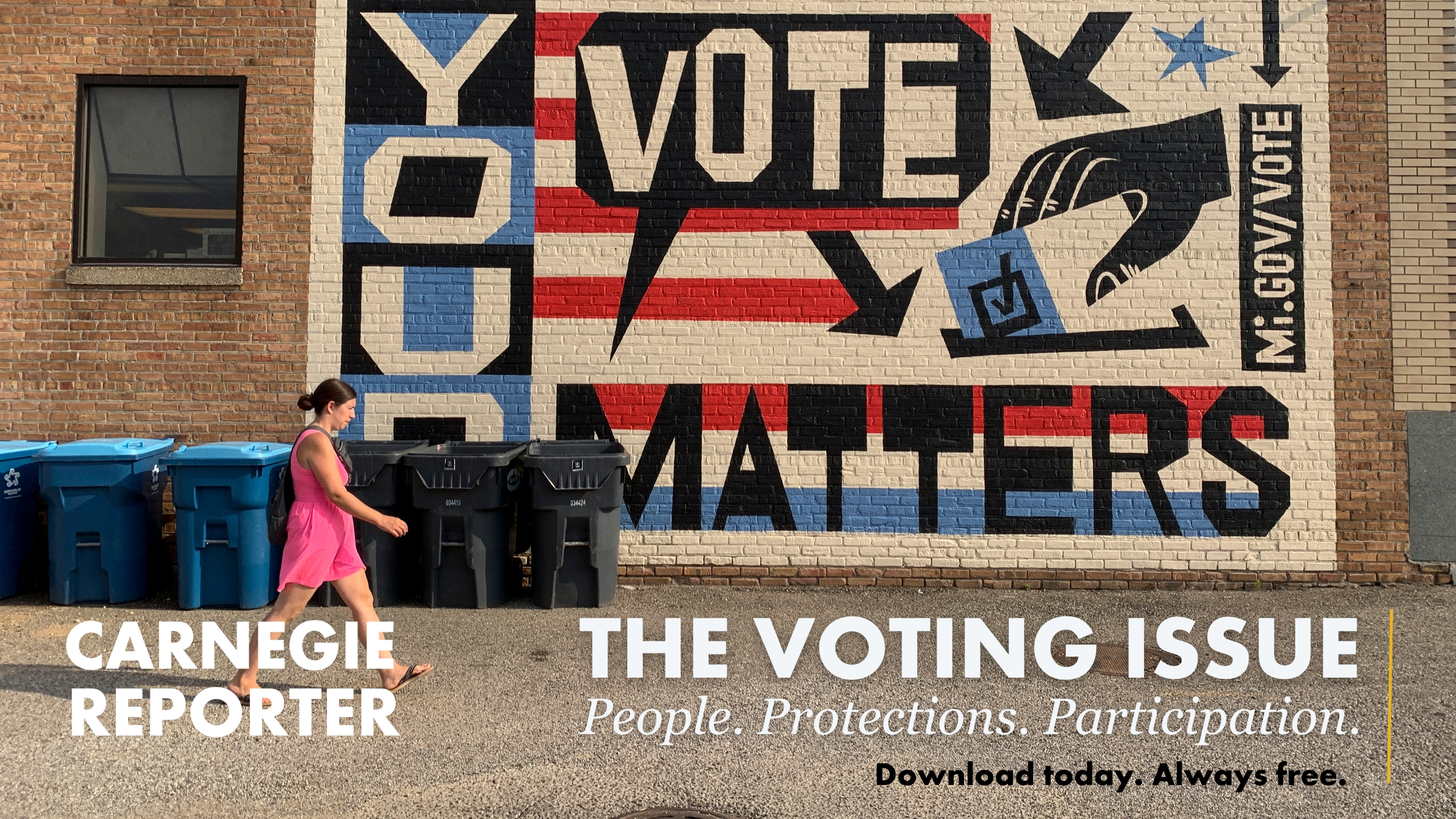