Señorita Colombia Concurso Nacional de Belleza de Colombia aka Miss Colombia National Beauty Contest of Colombia Organization has today announced "We are ready to welcome the most beautiful women around Colombia. From November 4 to 13, a new edition of the National Beauty Contest will be held in Cartagena.
Dressing room / Official Wardrobe: Virgilio Madinah @virgiliomadinah"

Successful day of interviews of the 29 candidates before the Jury 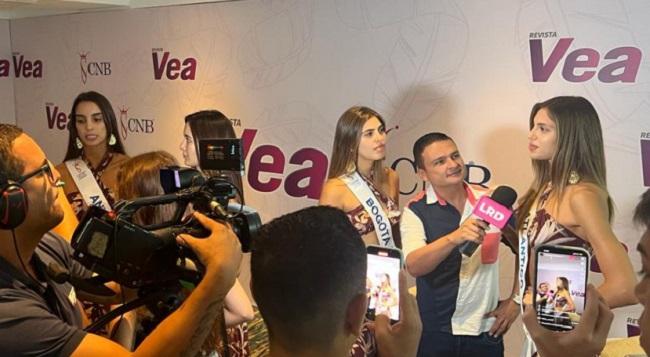 November 13, 2022: After meeting face to face with the qualifying jury, the 29 candidates went by groups to the press room, where the media asked them about how they felt about their performance in the activity.

The beauties agreed that more than an interview, it was a pleasant conversation where the invitation of the jury to be real and unique women flowed and was highlighted, with great security and leadership capacity, who can transmit those values, always very present in the National Beauty Contest®️.

“We leave with a different image of the contest. We arrived with fear, due to the demands of it and the public. But over time we realized that this, beyond everything, is a great family, and that the people of Cartagena, despite being a demanding public, have given us a lot of their warmth,” concluded Andrea Yáñez, Señorita Norte de Santander.

For the contestants, this is one of the most difficult tests, but the jury was very human and close, which made the nerves disappear and they were able to function better, in addition there were no questions in other languages.

The National Beauty Contest® invites you to visit the website www.srtacolombia.org to be updated with the events and to follow the steps of the candidates. You can also share with the number #YoSoyColombia through:

Since November 4 of this year, the 29 candidates for the National Beauty Contest ®️ will compete for the title of Miss Colombia ®️ 2022-2023 in the 88th version of the contest. Whoever wins will be recognized as the sovereign of the beauty that represents our country.

With extensive experience, the four juries in charge are ready to thoroughly evaluate the performance of each participant and finally choose the bouquet of the most beautiful in our country.

Who are the jurors?

Born in Panama, he has a Bachelor of Science, specializing in Economics and Finance from Bentley College, School of Business in Boston, Massachusetts.

He currently serves as Director and General Manager of Grupo Vigilancia Especial, a group of physical security and electronic security companies, with more than 30 years of experience in the Panamanian market.

The social communicator from Barranquilla won the title of Miss Colombia®️ in 2011 and is a specialist in Organizational Development and Human Processes at the Universidad del Norte de Barranquilla. She also has a master's degree in International Relations from the Pontificia Universidad Javeriana.

Her charisma and preparation allowed her to stand out as a television presenter, gaining experience in renowned media such as RCN, W Radio, CM& and Caracol TV.

As a result of a complicated medical episode, he created a foundation dedicated to impacting the quality of life and happiness of people with reduced mobility, to transcend physical and mental limits, and thus enable new opportunities that facilitate comprehensive empowerment and social inclusion. .

Graduated from the Pontifical Catholic University of Peru (PUCP) as a Bachelor of Arts, he studied Law at the PUCP, as well as at the Diplomatic Academy of Peru, obtaining the title of Career Diplomat and Bachelor of International Relations.

He followed postgraduate studies in Public Policy at the Latin American Faculty of Social Sciences of Argentina and a Master's Degree in National Defense at the National Defense School of Argentina. He joined the Peruvian Diplomatic Service in 1985, and has held diplomatic posts in Spain, Switzerland, the Holy See, Ecuador, Argentina, Venezuela, Suriname, Guyana, and Panama.

Graduate in Economic and Business Sciences from the University of Malaga, the city where he was born. He is also a Master in International Business Administration from the Instituto de Empresa de Madrid and International Leader Ship Program, with a Global Account Management course from the same institution.

As a professional, he served as Global Vice President McDonald's Account Manager and is currently a Partner at Gashil SA. He received the title of Royal Knight Order of Nobility of the Holy Sepulcher of Jerusalem.

Finally, the public will also have the opportunity to participate in this election, choosing their favorite through the platforms enabled by the CNB ®️ . Today, at 10 am, a press conference will be held, where the accredited media for the contest will be able to resolve their concerns and learn about what each jury is looking for in the election of the new Miss Colombia ®️ .