Hello World Must Check The American Governor Gavin Newsom New Act of Equality and ACT Immediately To Rectify The Historical Injustice Still Prevailing in Your Land To Save The Humanity To The Universal Survival: Watch Youtube LIVE Video @ Last of This Article

Thur, Sept 30, 2021, SACRAMENTO, CA, United States: World is Shaking with The Historic Words To A New Beginning from The 40th Governor of California. Former Lt. Governor of California. Former San Francisco Mayor, Gov. Gavin Newsom statement on "The Bruce family was stripped of their property in 1924 because of hatred and racism., It’s past time to right that wrong. Today, by returning the property CA took another step toward addressing systemic racism and set a path forward for other states & our nation to do the same." is backed with Crystal Clear electric spark to non-tolerance as "Now, officers who have committed serious misconduct won’t be able to simply get a job in a different jurisdiction—they will be off the force." with "We cannot let last year’s national cry for change be a fleeting moment. In California, we have the chance to make more change now.."

Governor Gavin Newsom today announced that he has signed the following bills: 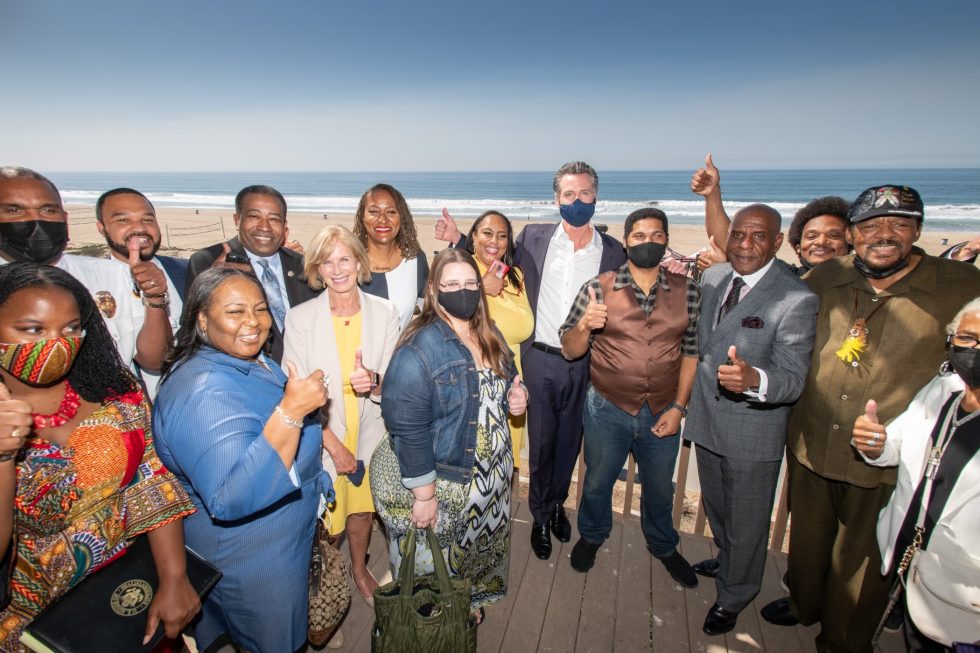 For full text of the bills, visit: http://leginfo.legislature.ca.gov

Assembly Democratic Caucus Chair and 64th District Assembly member, representing portions of South Los Angeles and South Bay Asm. Mike A. Gipson has thanked Gov Newsom in a Social Media Post saying Today’s a historic moment. Thank you to Governor Gavin Newsom for signing my bill #AB490 which would ban law enforcement from using restraints that cause positional asphyxia. We will never stop saying his name, Justice for Angelo Quinto!!!.

State’s work to redress historical injustices and advance equity include first-in-the-nation task force to study reparations for African Americans, reforms for a fairer criminal justice system and investing in an equitable recovery

The Governor signed SB 796 by Senator Steven Bradford (D-Gardena) today at Bruce’s Beach, alongside Bruce family members, legislators and local leaders. The urgency measure, sponsored by the Los Angeles County Board of Supervisors, authorizes the county to immediately begin the process of transferring parcels of the Manhattan Beach property to the Bruce family.

“As we move to remedy this nearly century-old injustice, California takes another step furthering our commitment to making the California Dream a reality for communities that were shamefully shut out by a history of racist exclusion,” said Governor Newsom. “We know our work is just beginning to make amends for our past, and California will not shy from confronting the structural racism and bias that people of color face to this day. I thank the Bruce family, Senator Bradford, the Los Angeles County Supervisors and all those who fought to keep the legacy of this place alive and deliver this long overdue justice.”

The Bruces purchased the property in 1912 and established a popular resort serving Black residents that was a fixture in the community. The Bruces endured years of racist harassment and violence, and Manhattan Beach city officials ultimately seized their property through eminent domain in 1924. Earlier this year, the Los Angeles County Board of Supervisors voted unanimously to move forward with a land transfer to the Bruce family in motions co-authored by Supervisor Janice Hahn and Supervisor Holly Mitchell.

“SB 796 shows us that it is never too late to address the injustices of the past,” said Senator Bradford. “If you can inherit generational wealth in this country, then you can inherit generational debt too. The City of Manhattan Beach, County of Los Angeles, and the State of California owe a debt to the Bruce family. This bill passed the Legislature unanimously and with overwhelming community support, making it clear that our state is committed to tackling systemic racism head-on. As a member of the California Reparations Task Force, this is an example of what real reparations can look like. I applaud Governor Newsom for helping us pay a century’s old debt by allowing Los Angeles County to move forward and return Bruce’s Beach to its rightful owners— the Bruce family.”

“This is a milestone for us, and I want to thank, not only Governor Newsom for signing this bill into law, but Senator Bradford for his leadership and the entire state legislature for their unanimous support,” said Supervisor Hahn. “The work is far from done. Now that LA County officially has the authority to transfer this property, my goal these next several months will be to transfer this property in a way that not only works for the Bruce family, but is a model that other local governments can follow. Returning Bruce’s Beach can and should set a precedent for this nation and I know that all eyes will be on Los Angeles County as this work gets underway.”

Under Governor Newsom, California has made strides to advance racial justice. The Governor earlier this year named appointees from a wide range of backgrounds to serve on the new Task Force to Study and Develop Reparation Proposals for African Americans, on which Senator Bradford also serves. The first-in-the-nation task force was established under legislation authored by then-Assemblymember Shirley Weber that the Governor signed into law last year.

Taking aim at structural racism and systemic injustice, the Governor issued a moratorium on the death penalty, which is unfairly applied to people of color, among other groups, and has signed critical reforms to create a fairer criminal justice system. These efforts include legislation signed earlier today to create a system to decertify peace officers for serious misconduct, and reforms banning the carotid restraint, requiring the Attorney General to conduct investigations into certain officer-involved shootings and transforming the juvenile justice system to put more emphasis on rehabilitation. In support of an equitable recovery, the Governor has advanced unprecedented relief for Californians hit hardest by the pandemic, made historic investments in school funding to increase opportunities across the board and funded targeted supports for underserved communities.

“Today marks another step toward healing and justice for all,” said Governor Newsom. “Too many lives have been lost due to racial profiling and excessive use of force. We cannot change what is past, but we can build accountability, root out racial injustice and fight systemic racism. We are all indebted to the families who have persevered through their grief to continue this fight and work toward a more just future.”

“Today is an important day. It’s an inflection point in how we provide for public safety in the State of California,” said California Attorney General Rob Bonta. “I’m proud to stand with my former colleagues and Governor Newsom to embark on a new chapter in our shared fight to infuse our criminal justice system with more trust, transparency, and accountability. By building trust today, we are ensuring officer and community safety for tomorrow. Trust generates safety and safety generates trust. It will take sustained work by all of us to get the job done, but this is a monumental step forward on the path toward justice.”

“I am proud of the important progress the Legislature and Governor have made this year to help make sure people of color in California can be safer in their dealings with law enforcement. No one should have to fear those who are sworn to protect them,” said Senate President pro Tempore Atkins. “My colleagues in both houses who worked tirelessly for these bills, and the family members, community advocates, and responsible law enforcement leaders who helped get the bills across the finish line all deserve our thanks. There is more work to do, and we are already back at it. Four hundred years of racism won’t be erased overnight—but the arc is bending and the moral momentum is on our side.”

“California has one of the most progressive criminal justice systems in the nation,” said Senator Bradford. “But for too long, problematic officers that commit heinous acts in one department are either not held accountable and continue to be a problem for that community, or are punished, but able to find employment in another department. This rinse and repeat style of accountability has led to the continuous erosion of community trust. At long last, California finally joins the 46 other states with processes for the decertification of bad officers. I’m proud to have authored this landmark bill for California, which honors Kenneth Ross Jr. and the many others who have had their lives taken by police who abuse their power. My deep appreciation goes out to the families, community organizations, advocates and legislators who were willing to stand up and support this positive change. I applaud Governor Newsom for standing with us on this issue and look forward to working with the Administration on more ways to improve public safety and rebuild public trust in our law enforcement system.”

“Trust in law enforcement erodes when police misconduct is kept secret and officers who’ve acted badly are allowed to avoid consequences,” said Senator Skinner. “SB 2 and SB 16 will help restore public trust in California policing. By signing these bills, Governor Newsom has ensured that police who commit serious misconduct will no longer have the privilege of wearing a badge and that we, the public, have the right to know when officers use excessive force or engage in racist or biased behavior.” 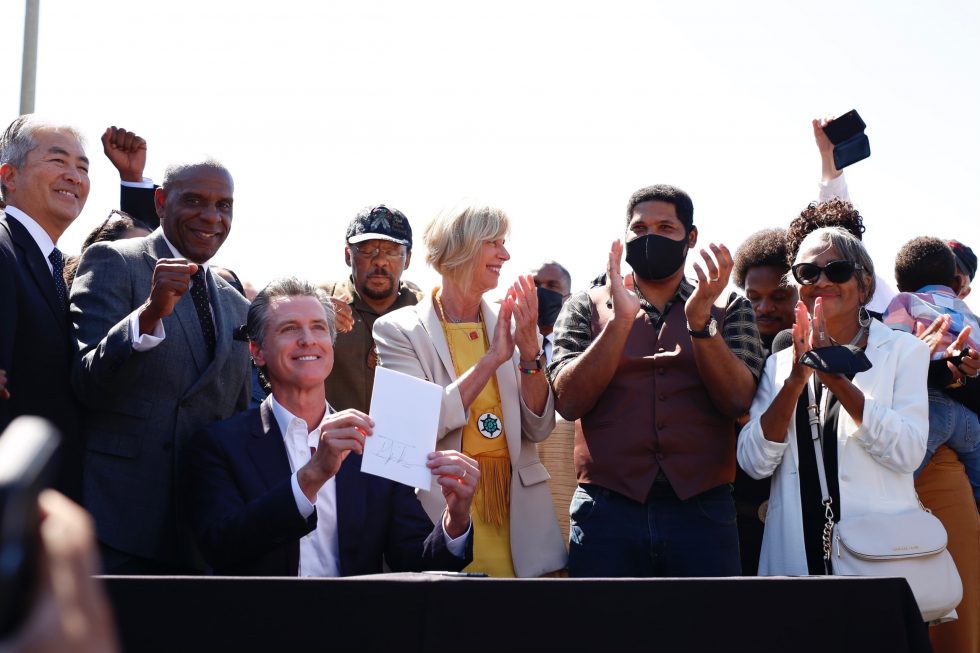 Governor Newsom also signed AB 26 by Assembymember Chris Holden (D-Pasadena) which creates guidelines for police officers to intercede and immediately report if another officer is using excessive force; AB 89 by Assemblymember Reggie Jones-Sawyer (D-Los Angeles) which raises the minimum age to become a police officer to 21 and will enhance education requirements; and AB 490 by Assemblymember Mike Gipson (D-Carson) which bans technique and transport methods that involve risk of positional asphyxia.

A full list of the bills signed by the Governor is below:

Governor Newsom last year signed a series of bills into law initiating critical criminal justice, juvenile justice and policing reforms in California, including banning the carotid restraint, requiring the Attorney General to conduct investigations into officer-involved shootings of unarmed individuals that result in death and legislation that reforms the juvenile justice system to put more emphasis on rehabilitation and education. The Governor last year also released recommendations from his policing advisors for improving police response to protests and demonstrations and directed the statewide Commission on Peace Officer Standards and Training (POST) to modernize training and guidance for law enforcement.

For full text of the bills signed today, visit: http://leginfo.legislature.ca.gov